I've always wanted a metallic-chrome Shockwave or Jetfire in the tradition of the Takara lucky draw figure. Through my travels in the Shockwave space, I've amassed enough spare parts to build a Galactic Man, and I plan to chrome it up, without the shame of ruining a perfectly good figure. Galactic Man is a particularly fortuitous outcome, as I can treat this as a homage to the chromed 'Astro Magnum' (actually a Galactic Man) that Toyco shared on their twitter page in 2021.

Here's the exploded Galactic Man, in a shoebox lid. Everything here is from the GM version, except for the battery cover and barrel, which are from Shockwave. I will probably replace the barrel with a clear version. I've bought a real trashed one on ebay - they are factory glued at one end, so prying them apart for painting risks permanent damage. The battery cover has the typical stress mark on the latch, so it's a good candidate for painting. The shoulder ratchet-springs are actually from the Electronic Magnum/Spark Man versions, which are about half the length. The SW/GM springs are too strong, and I don't want to wrestle with my freshly painted pieces to the point of spoiling the finish. This is why you'll often see Shockwaves with split shoulders - for some reason the powers-that-were decided he need super hardcore springs, and this carried over to GM. There is a board housing from an old EM here. I've sawn off and sanded the dowels, which are normally heated at the factory to fuse contacts to on EM/SM, which then connect the circuit board and the lamp, since they were melted, unsightly and obsolete. They are not utilized on SW/GM as the lamp's wire connects directly to the circuit board. I've replaced the lamp from a vintage junker and the sound and lights are fully functional. 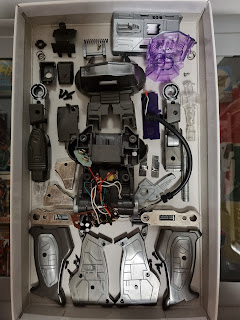 The parts need to be clean to take the paint properly. I will soak them in a some detergent for a day, and rinse them tomorrow. Some parts of the body that house the electronics and speaker will just have to settle for a wipe down. 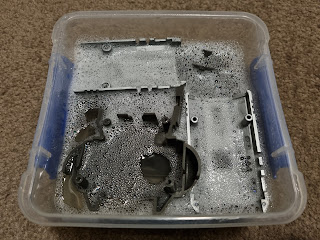 Owing that it was a sunny but cool spring day, on a Saturday, I quickly started the set up for painting. I pat dried the parts with paper towel and attached them to bamboo skewers with Blu Tack. Some parts had been masked in advance (without washing), such as the clear section of the chest, the range-finder on the back pack, and I attempted to block of the openings for the speaker to limit the paint getting inside. 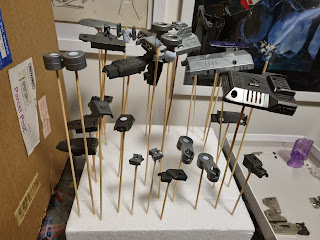 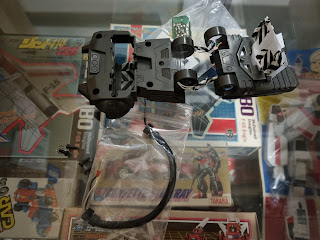 Since this was a one-of project, I purchased some Preval kits, that allowed me to use any paint. I used Green Stuff World Metal Chrome (for Airbrush, 17 ml). They are pretty small, and they get used up very fast. The initial siphon into the delivery tube probably eats up a quarter of the volume. I popped the nozzle off each bottle with a blade, and inserted the tube, and lowered the bottle into the paint reservoir, which screws on to the bottom of the propellant can. I then went outside and did the spraying, piece by piece. All up, I used 6 bottles to get 2 coats, which is about 85 bucks (AUD) worth of paint. The Preval kits are about 15 dollars each, and each one will deliver 470 ml of product, so one easily covered this project. 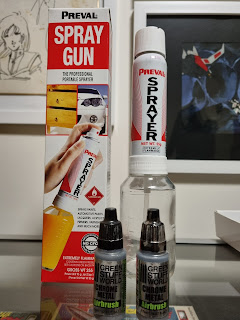 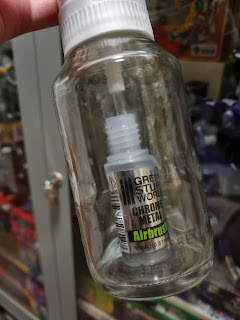 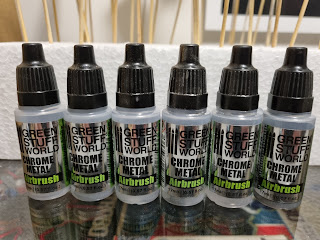 Even when spraying at recommended distance, it quickly formed a wet layer and kind of self levelled. But given the geometry of many of the parts, paint would pool or funnel and there was a fair bit of wastage from dripping, and sometimes I'd use a cotton-tip to soak excess paint. Ultimately, some parts had uneven drying, and there were hazy areas left on the surface. 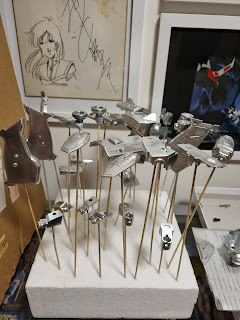 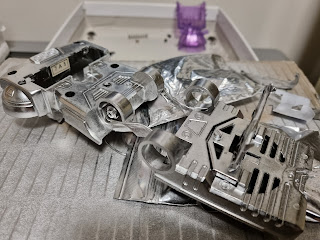 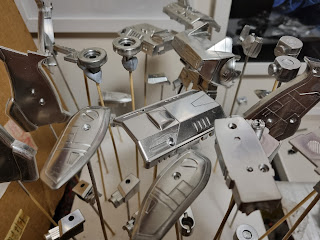 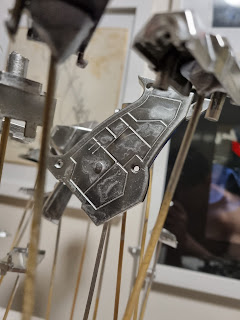 I plan to leave these to dry fully for a week, and then lightly polish each piece to remove the hazing and bring out the reflectivity of the surface. Then if everything goes according to plan, assembly!

I polished the pieces with a polishing cloth. I wasn't happy with the matte finish resulting from the raw spray application. Polishing brought a glossier finish, at the expense of an uneven coverage. Considering the two options, I decided to hand polish each piece, and go for a more rustic finish. It wasn't the outcome I expected, but it was still aesthetically interesting, resembling a more real-world, weathered-metal appearance, rather than the mirror finish I'd expected. In hindsight, I could have saved on paint costs. I found that touch-ups/reapplication using a drop from the nozzle directly onto the part, and then spreading with a brush resulted in the same effect, with no wastage/overspray. It could then be polished and achieve the same patchy look. 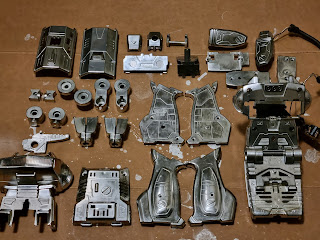 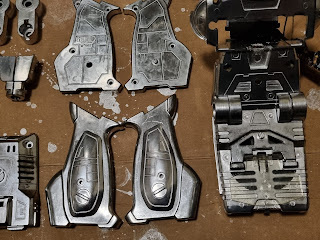 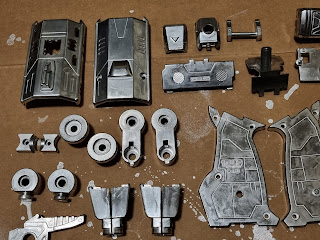 These issues arose because I compiled parts from a box of spares, without assembling into a full figure to ensure completeness and integrity. The hubris! I must have mixed leg halves with different tolerances, obviously one half was a dud piece with a stripped screw-hole!.
If I'd have sprung for a proper airbrush, with a finer mist, I might have achieved a more consistent paint coverage and gloss effect. Perhaps all the parts required a polish and a base coat to produce a smoother surface, which would then translate to a superior metallic finish. But I am loathe to alter the factory molding in any way.
Anyway, I learnt a lot and have plans to try a wet silver deposition method next. I've ordered a kit already!
See below for the result. 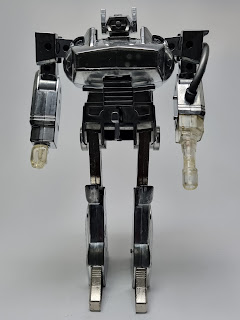 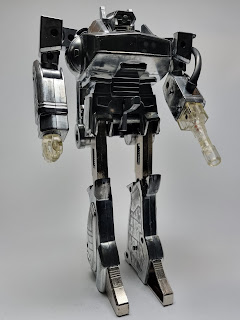 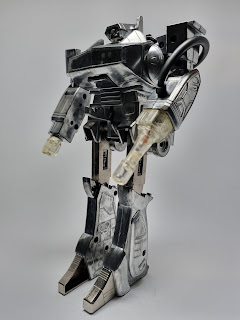 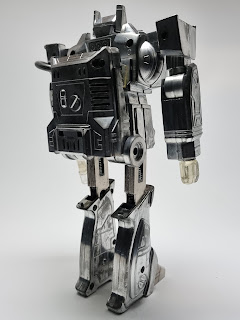 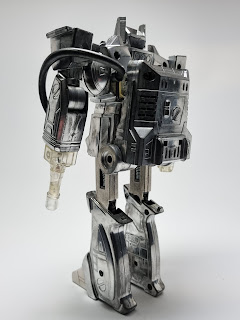 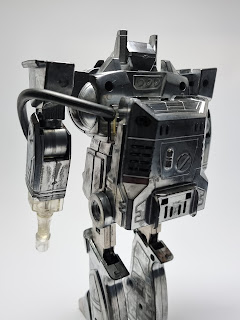 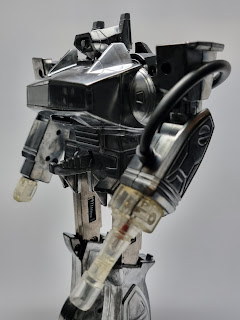 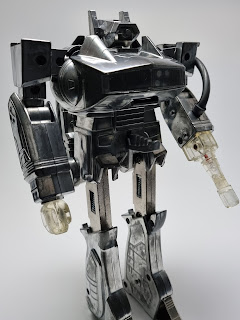 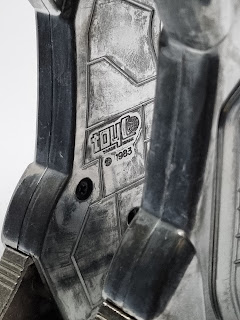 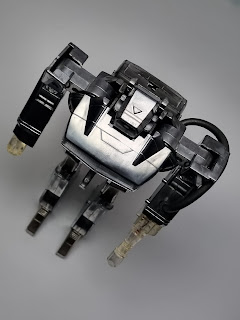 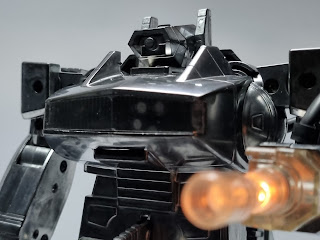 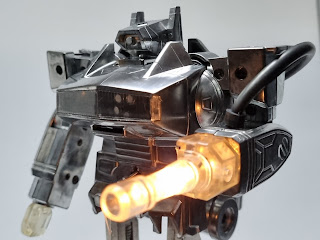 Posted by masarujasu at 5:21 AM

Email ThisBlogThis!Share to TwitterShare to FacebookShare to Pinterest
Labels: Fanart