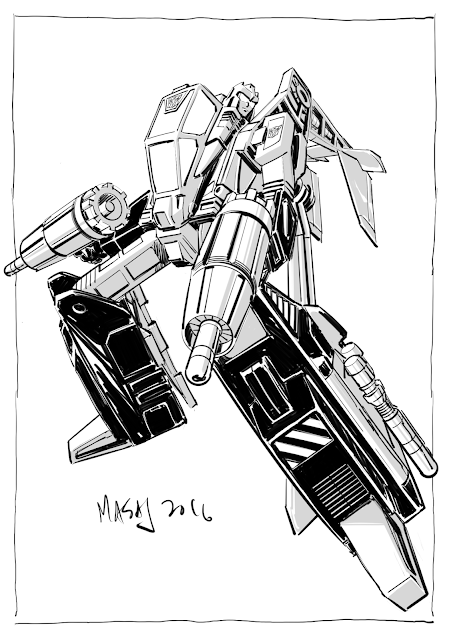 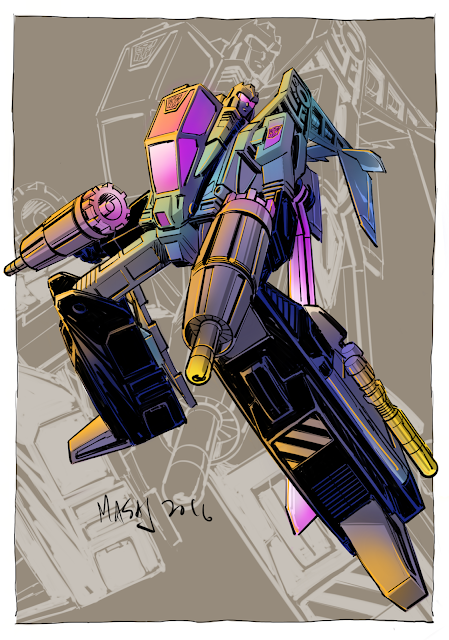 Posted by masarujasu at 2:02 AM No comments: 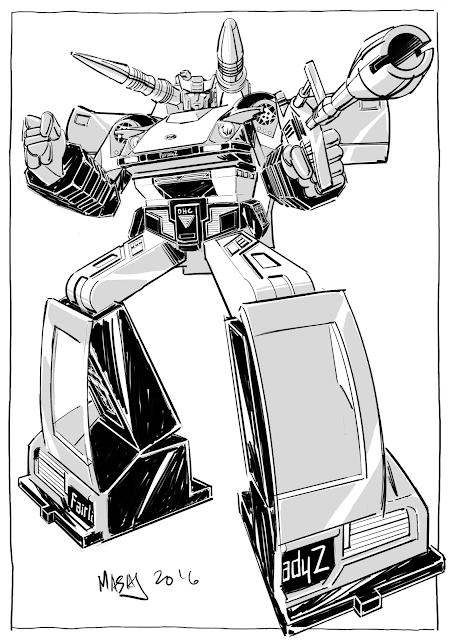 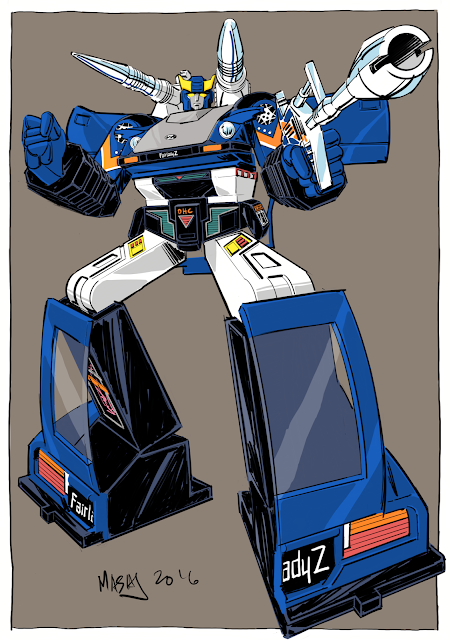 Posted by masarujasu at 2:25 AM No comments:

The pair of Diaclone F-15 Eagles are shown below. Only the two versions exist, the Acrobat Jet and the Fighter Jet that were the direct inspiration for Thundercracker and Starscream respectively. Skywarp did not have a Diaclone incarnation.


A small selection of Transformers F-15 Eagles are shown below - almost entirely Starscream. With the exception of the 1986 Starscream Release, the box variants that apply to Starscream are equally applicable to Skywarp and Thundercracker. All three have NGB boxes as well, although I'm only privileged enough to show one here.

In Japan, all the series one and two jets were released boxed, except for Dirge which was available as a mail-away. A couple of examples below.

The items featured on this page have been placed on the Timeline below. Treat it as relative rather than absolute.

Below are F-15 Eagle (and derivative) jets that I've photographed for comparison. The exercise is to look at the progression of changes and place the variants on the Timeline. All of the series one jets were available as part of the same assortment #5780 when the Transformers toyline debuted in May 1984, as prerubs in ™ boxes, with '© 1984 Hasbro Industries, Inc.' on the back. They were all available again in 1985, and like the series two jets, featured rubsigns and came in ® boxes, however the copyright indicia on the boxes were not updated. In 1986, only Starscream was released from the true Eagles, as part of a new assortment #5784 with Cyclonus and Scourge. 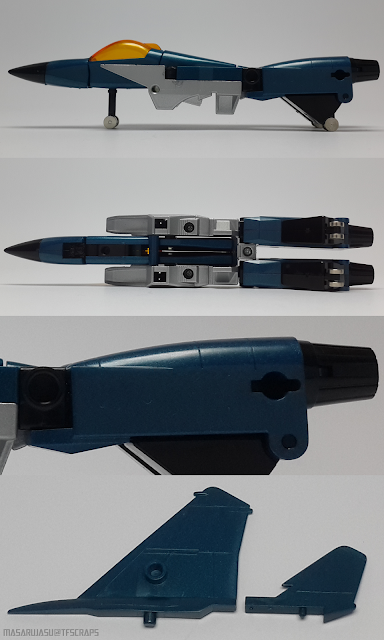 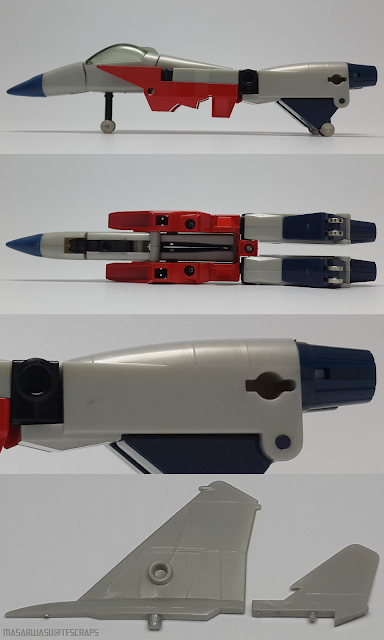 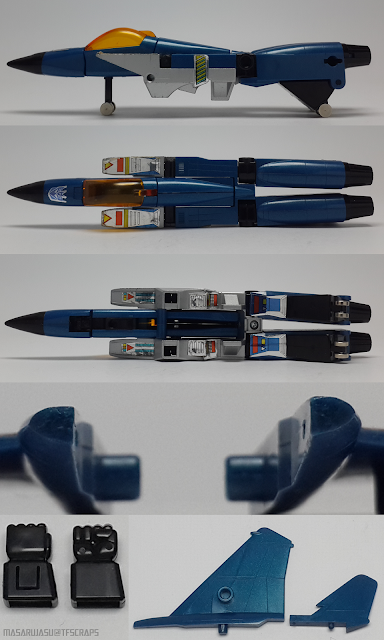 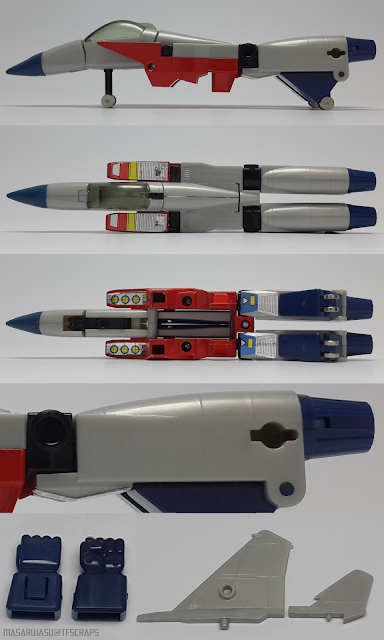 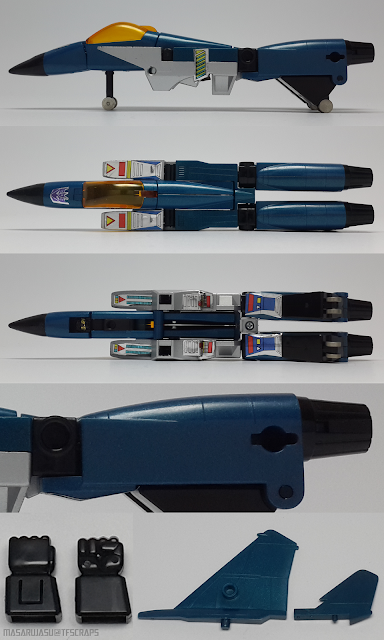 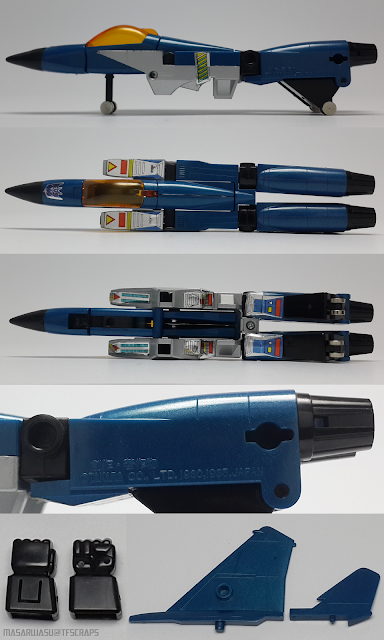 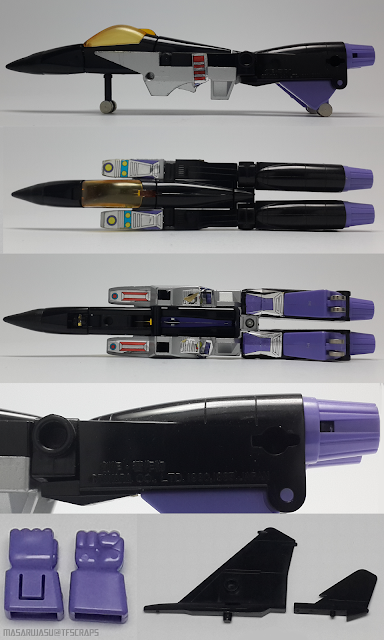 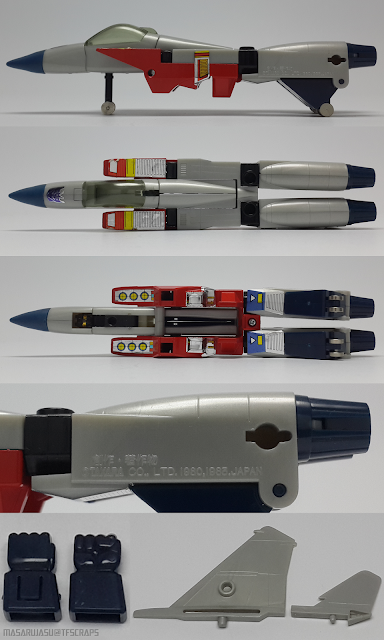 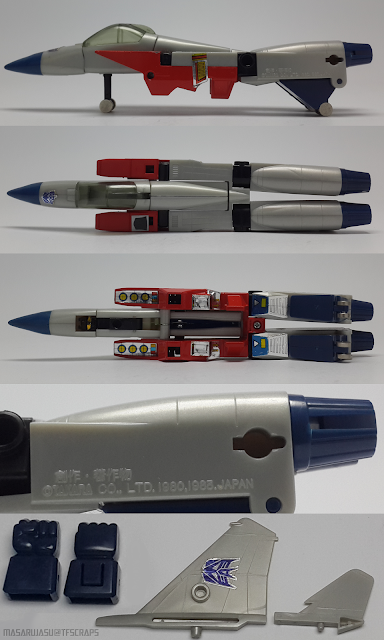 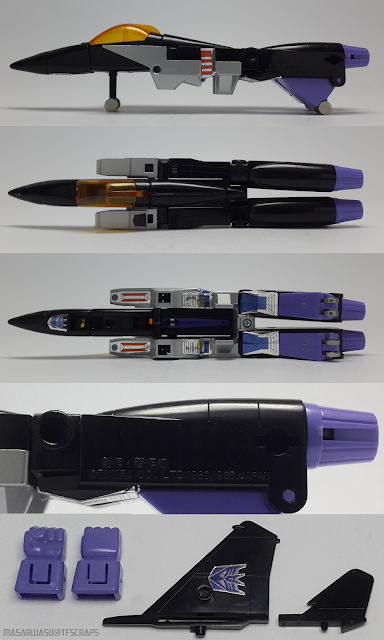 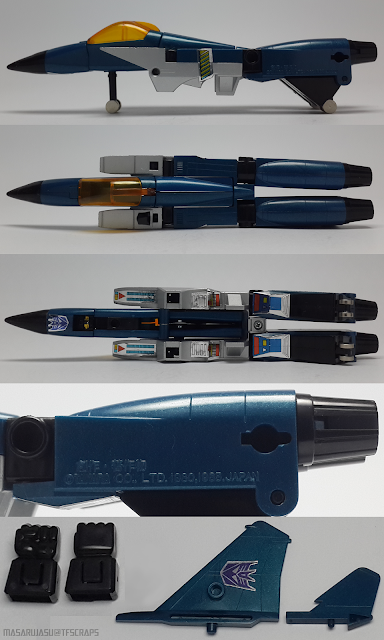 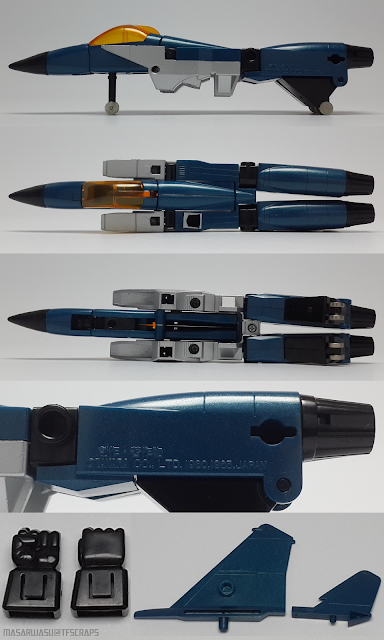 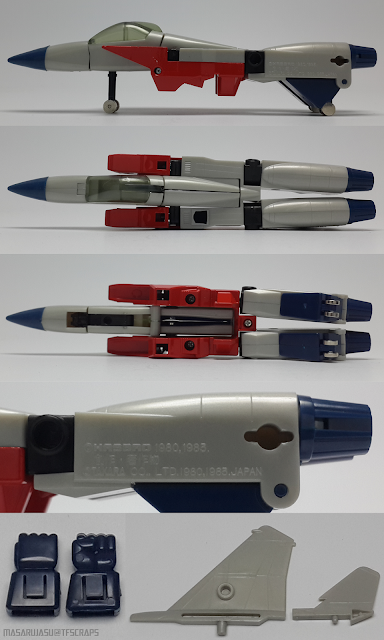 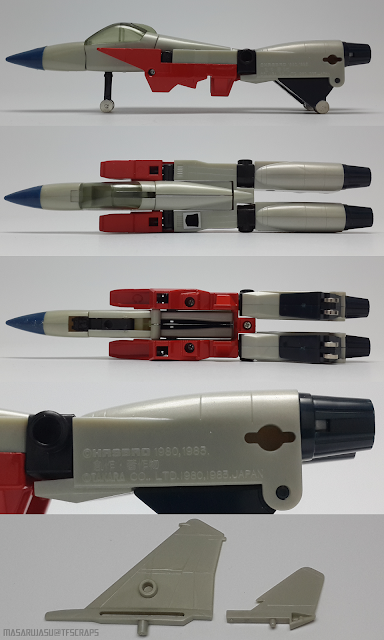 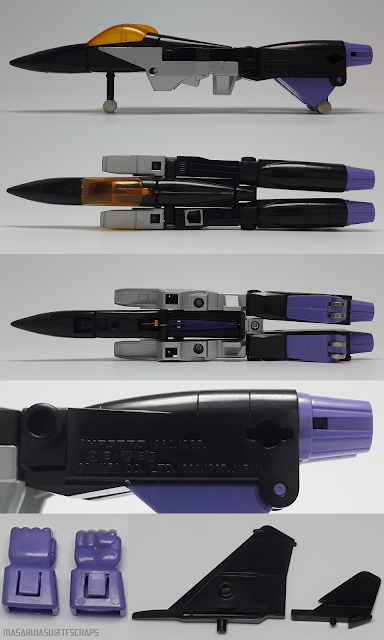 Thrust, Ramjet and Dirge without exception came in ­® toyboxes as part of the #5785 assortment. All three featured a rubsign. The boxes always state, '© 1985 Hasbro Bradley, Inc.'. A limited production batch features the rubsign misplaced on the diecast intake instead of the plastic body, which was corrected on subsequent batches. It appears they didn't make it in time for inclusion into the 1984 Montgomery Ward Christmas Catalog, but of course with printing lead times, the absence of a thing is not necessarily proof of its absence. Safe to say they were on sale in 1985. Thrust and Dirge were featured in the 1985 Sears Catalog as a Christmas idea (Source). All the series two jets were released again in 1986. 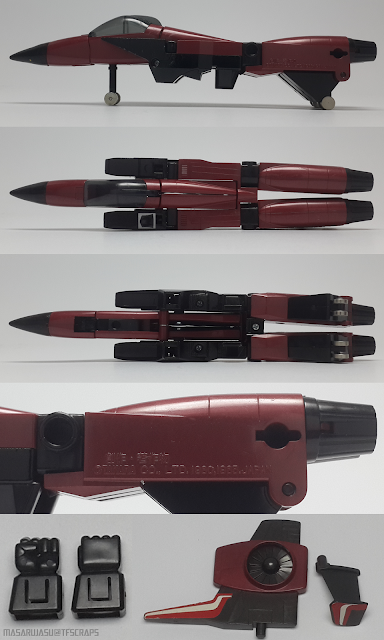 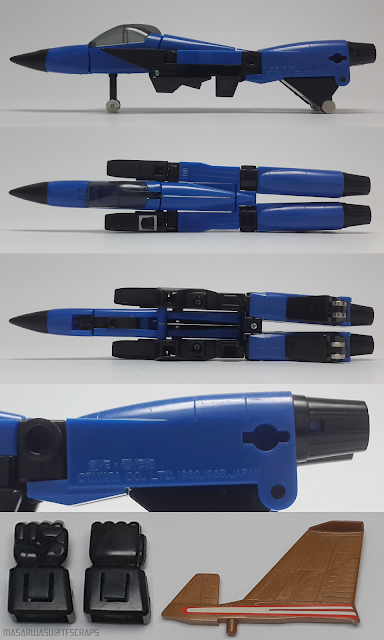 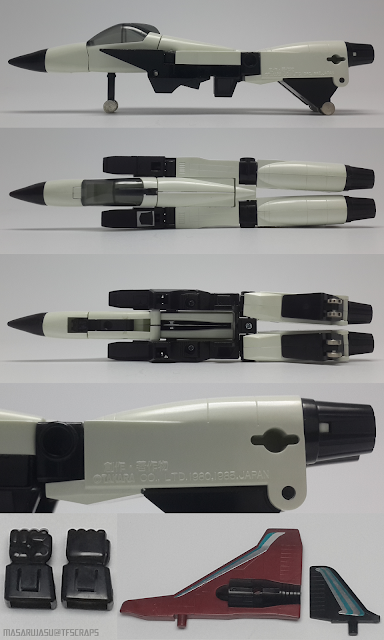 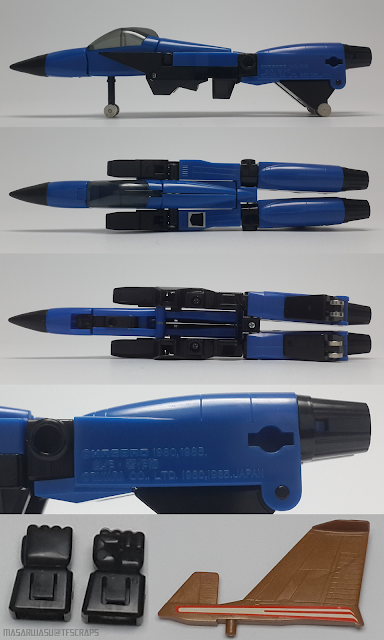 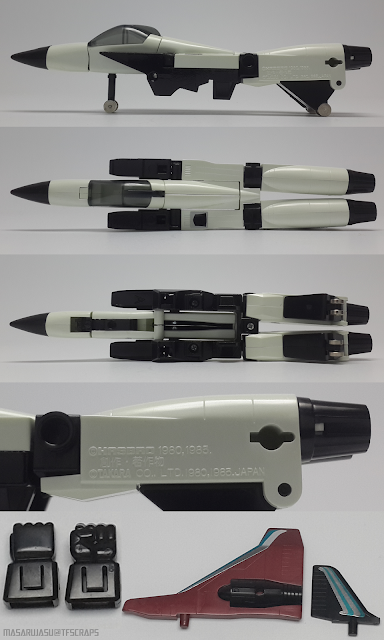 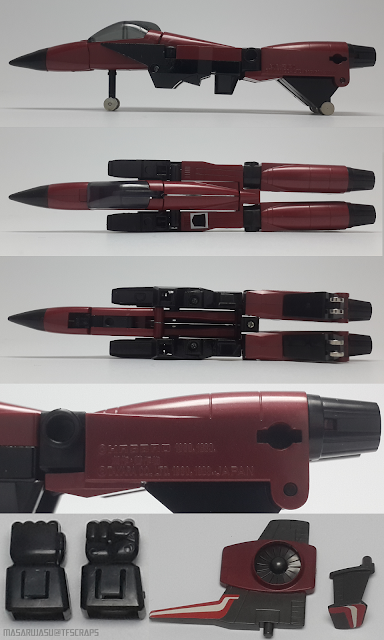 Although there are various off-colour or off-model knock-offs of the F-15 mold, the only fake to attempt to imitate a legitimate version off the toy is the Kingdam 06. Made in Taiwan in the early 80s following the release of the original Diaclone Jetrobo, this counterfeit bears a striking resemblance to the pre-Starscream version of the toy. Some very notable differences include an amber/orange canopy, similar to Thundercracker's in hue, as well as grey rudders and black fists instead of dark blue. The main wings feature KINGDAM6 on the factory applied sticker. All the blue parts are much lighter color than the Diaclone. Overall, the quality is poor. The gray plastic feels inferior, so much so that it is verging on transparent at the thinner parts such as wing edges and missiles. The molding is also inferior, with many depressions and lines on the plastic surface, from sub-standard mold-cutting and injection. 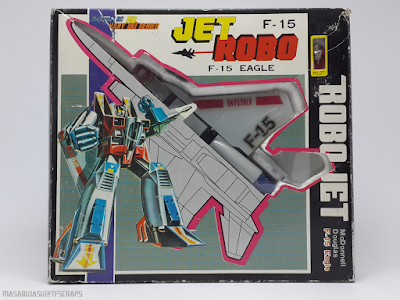 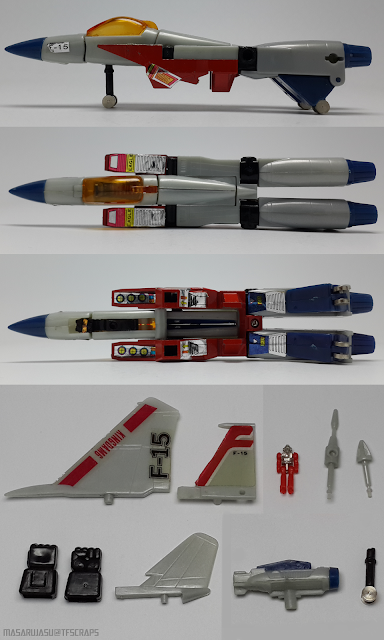 Posted by masarujasu at 6:24 AM No comments: