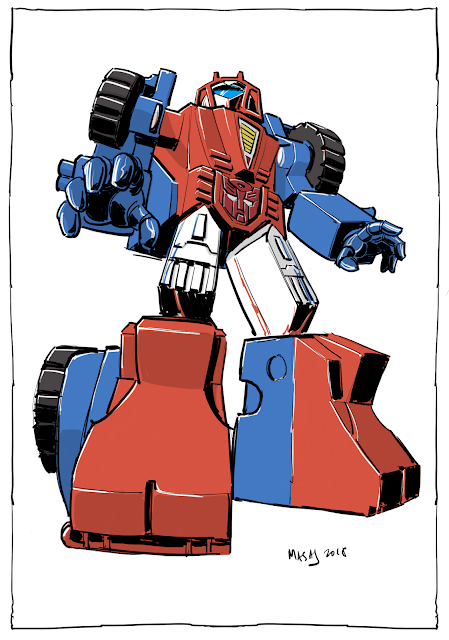 Posted by masarujasu at 4:28 AM No comments:

One of the fascinating mysteries of the G1 Transformers toyline surrounds the so called 'Bumblejumper' figure that appeared briefly on Cliffjumper cards in 1984.

I'll discuss my thoughts on the figure in the context of my previous entries on toy hallmarks.

'Bumblejumper' is the fandom ascribed name to the G1 appearance of the Micro Change Microrobot Car - Mazda Familia 1500XG. The figure is understood now to have only appeared on Cliffjumper cards in the color yellow, even though the name originated from the misconception that he appeared on Bumblebee and Cliffjumper cards equally. He was only ever a prerub and only came packed on ™ cards in car mode. It is important to note, for reason that become clear in this article, that Bumblejumper only ever appeared with the dated Takara-only copyright notice (stamp) on the underside.

The Micro Change Microrobot Car figures (that originated the original six Transformers Minibots) were first released in Japan in 1983, in two types of packaging:
I will digress further at this point to state that the Mazda figure was licensed by Hasbro Bradley as 'Sedan' to Estrela, for their Brazilian Transformers 'Robocar' line, that included the original six minibots, with the exception of Huffer who was replaced by Bumblejumper. With this release, it surfaced that a character artwork of the figure in a white color-scheme existed, in the hallmark style of artist Mark Watts, who was responsible for of 1984's minibot artwork. However, Mark has never laid claim to this artwork and it is possible that it is a bespoke piece organised by Estrela itself.


The existence of the artwork led to speculation that Bumblejumper was intended for a Hasbro release. Consistent with the G1 artwork for Bumblebee, Bumblejumper's rendition includes the roof sticker from the Micro Change versions of the toy that was not featured on the G1 figures. A possibility is that the artist was given Micro Change references or samples by Hasbro to create artwork from, very early in the development of the product line. Alternatively, as the Sedan artwork does not allow any room for inclusion of the Autobot insignia, and all of Mark's art feature this, this piece may well have not been produced at Hasbro's direction, and thus was never intended for inclusion in the G1 toyline, and is in fact an original Estrela piece.

If the figure was planned for inclusion in the toyline, it appears to have never made it further than a consideration at worst and an artwork at best. Hasbro obviously had the option to select the figure from the Micro Change catalog, however, by the time the toyline was unveiled at the 1984 Toy Fair, six figures has been decided upon - Bumblebee, Cliffjumper, Huffer, Gears, Brawn and Windcharger - and they were to appear four apiece in the 5700 assortment case containing 24 figures. This left no room nor need for a seventh figure. Perhaps the figure was too similar to Cliffjumper to be worth developing further as a catalog figure at that price point, and thus his characterization was never fully developed or committed to the comic and cartoon canon (which were marketing tools to sell the toys). Instead, Hasbro gave the impression of a larger minibot line by simply including red and yellow variants of both Bee and Cliff, which would have been two apiece per case. These ratios were maintained in the 5709 assortment that introduced rubsigns and minispy companions.


The next question is how did the figure end up on Cliffjumper cards in 1984? Some hypotheses suggest that it was Takara overstock from the Micro Change line. There are several reasons why I don't agree with this. Firstly, the Micro Change figure is a different color plastic from the G1. Secondly, the Micro Change figure is circle stamped ('TAKARA JAPAN'), and there are no circle stamped Bumblejumpers in existence. It can't be overstock if it features the copyright stamp that Hasbro instructed Takara to add to the toy (I will get to this). Thirdly, Takara didn't produce surplus figures just to sit on them until a partner came along. Once made, they were out of the factory door. George Dunsay recalled, "Remember, we originally were limited to Takara's original, complete tooling. There was no Takara overstock. The line became so hot they diverted some of their domestic production for us." That is to say, production time, not product. Hasbro found themselves with 100 million dollars of preorders by March 1984 and only forecast to meet 75 to 80 percent of that by the end of the year. Therefore Takara was under the proverbial gun to fulfil their contract and put Hasbro product as top priority. 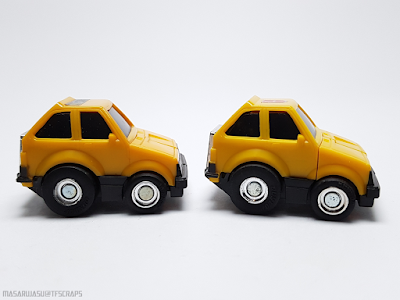 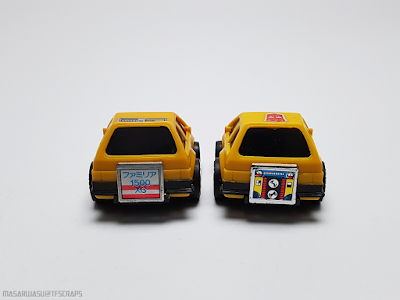 It is precisely the diversion of time that leads me to my answer.

When Hasbro struck The Agreement with Takara, one of the stipulations was that Takara was to update the existing products with manufacturer notations as Hasbro saw fit. In the course of modifying the toys to meet Hasbro's specifications, Takara designed new molds that contained a copyright notice; at the same time, it added a copyright notice to its old molds. Takara had never used these for their domestic product. They used a maker's mark but not a copyright notice. However, we find almost all of 1984's G1 line-up to have specimens with only the maker's mark and no copyright notice, which are accepted to be the earliest G1 releases. This is where if we understand that Takara diverted their own domestic production to meet Hasbro's demand, then they began fulfilling Hasbro orders before they had the opportunity to update the existing toy molds.

This is why we have 'Diaclone' or 'Micro Change' stamped toys with no copyright notice. Hence, we find all six initial prerub Minibots in the 5700 assortment with a maker's mark or circle stamp. And then later, the same six prerubs with a dated Takara-only copyright stamp, in the same assortment.

However Bumblejumper only ever has the dated Takara-only copyright stamp.

My conclusion is, when all the injection molds were swept up for retooling to add the copyright stamp, the Micro Change Mazda mold was one of them. Takara was under time pressure to keep the production lines chugging and mistakes were made in the hustle and bustle. And what happened to any mold after it was retooled? Obviously they went back to the production line to be used to produce more toys. The Mazda mold itself ended up on the factory floor, being injected with yellow and black plastic in order to make... yellow Cliffjumpers! I firmly believe that the mold was mistaken for Cliffjumper and tossed into the production line for a short period, churning out Mazda figures that ended up in Cliffjumper packaging. And, it was the copyright stamp retooling event that caused the Mazda mold to enter production. This is further supported by the fact that Bumblejumper wears the same rear sticker that belongs to Cliffjumper.

It was obviously a mistake that was detected and rectified, because Cliffjumper was packed correctly ever since, including immediately after Bumblejumper's limited appearance, as the prerub dated Takara-only stamped Cliffjumpers that only appeared in that assortment. However one can only guess at what stage the error was discovered - during parts harvesting, assembly, or packaging. The error was deemed acceptable enough to pass QC, eventually reaching retail display racks to delight, confuse and fascinate fans and collectors for the next three decades.

Posted by masarujasu at 8:25 AM No comments:

It's been almost a year since I last contributed to the blog. I'd only recently acquired an original Toyco Astro Magnum, and I felt the need to revisit its origins again. 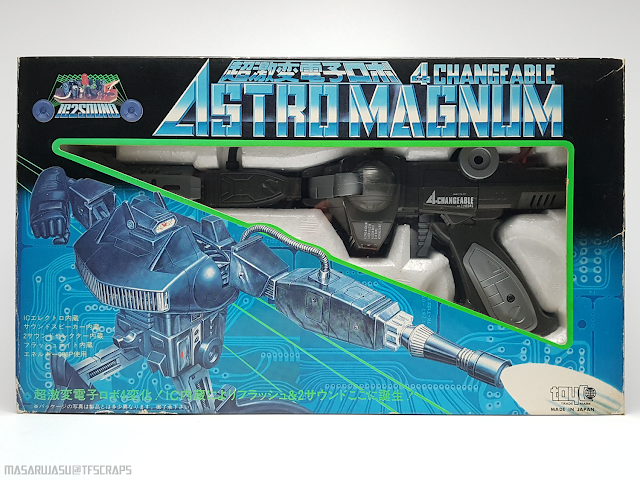 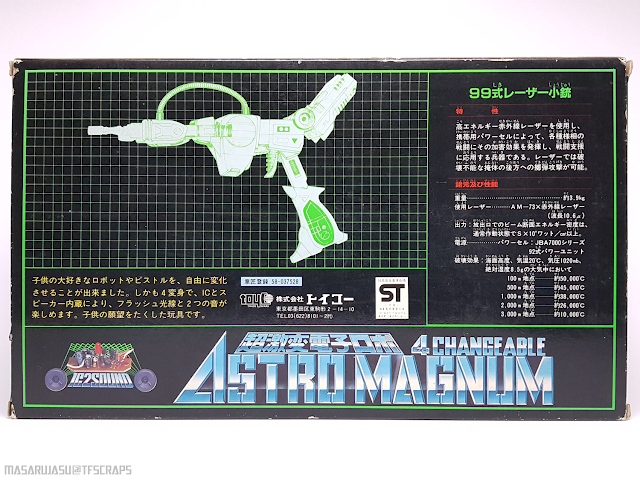 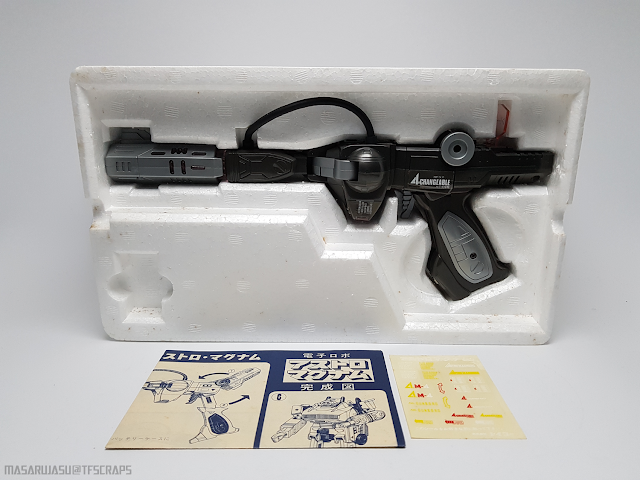 I've been largely obsessed with finding the patent for the toy, but so far it has been a fruitless investigation. On the back of the packaging there is 意匠登録 58-037528 which is a 'design registration' number. 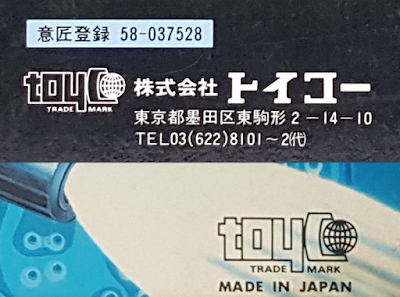 The Japan Platform for Patent Information allows a search of the design number. Punching in the details, we return that in Showa 58 (1983), a design application was made with the Japan Patent Office (JPO). 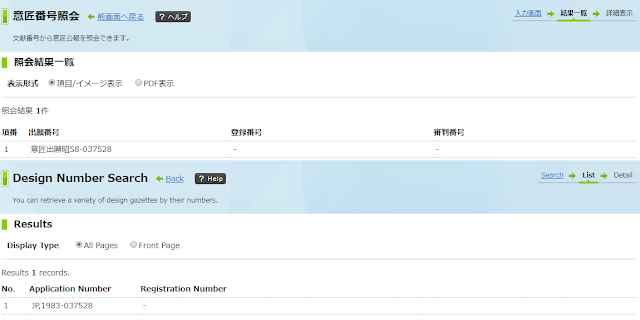 I'm still hoping to track down the actual patent and schematics. The search continues...
Posted by masarujasu at 4:42 AM No comments: