I saw this go under the radar on auction in August 2017, under title:
アメリカ版 試作 景品用 コンボイ オプティマス
(American version prototype for prize Convoy Optimus)

My gut feel was that it was a legitimate prototype/prize figure. I've read previously about similar items - clear plastic versions of reissue figures, and vacuum metallized reissue Seekers - that either served as test-shots (for inspection, fault-finding) or created for promotional prize draws, (or utilised ultimately for both purposes). Read about them here, here, here and here. When it comes to purpose, hearsay is involved, but there is definite, albeit scattered documentation of these types of figures themselves, and they appear to be truly scarce, which actually supports legitimacy (as in not mass produced counterfeits). At the very worst, this is a 'lunchtime special', a clandestine product borne outside official factory hours. At best, this an extremely rare and possibly unique prototype figure that received some extra preparation - custom decal application, additional accessories - in order to be offered as a prize figure

This item was auctioned by the same seller sharbicc who had sold what appear to be contemporary prototypes nearly 10 years ago. Many other signs pointed to it being a legitimate reissue figure, that is it has all the hallmarks of an official reissue Optimus Prime, from the unique wheel pins, bumper moldings and sticker cut, down to the part stamping, and none of the hallmarks of a KO figure (which all are based on a T2/#3 French or Japanese Prime). Also there are no short-stacked counterfeits on the market, so I jumped. Fortunately, nobody else bid and I got it for a song. 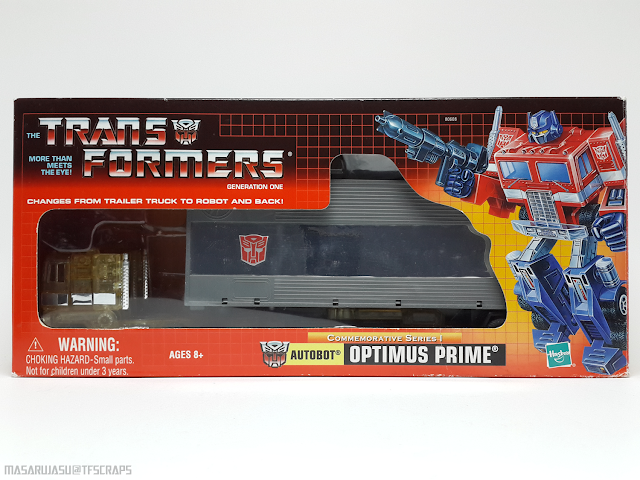 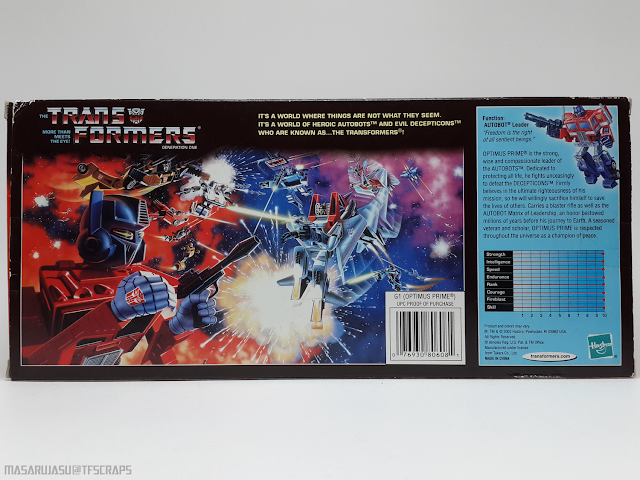 The figure comes in Hasbro Commemorative Series 1 packaging. The mass retail figure was released in 2002. 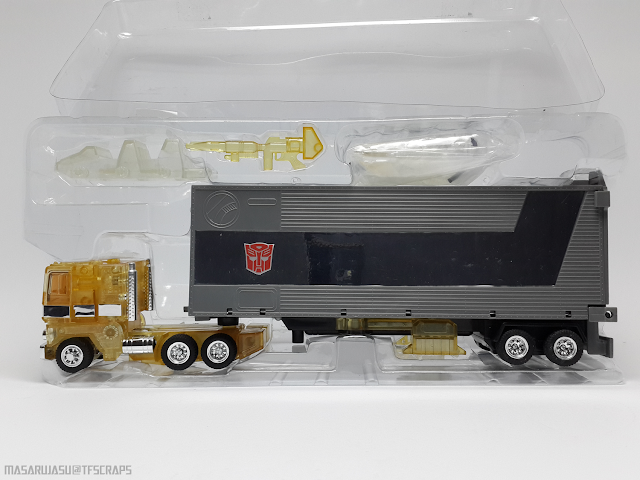 Opening up the clamshell, you can see that it is the US version cab, with the shortened smoke-stacks for safety. The cab forgoes the die-cast chassis and leg parts, replaced with plastic. The cab is almost entirely a translucent amber plastic. The typically chrome parts remain - wheels, stacks, grill. The trailer is rendered in standard grey plastic, and the amber plastic replaces all the trailer parts that are normally blue. Across the cab and trailer is a glossy chrome sticker trim. Tyres are standard black rubber. I've had discussions with other collectors on Facebook on whether this is intentionally an amber plastic, or it is a clear plastic that has yellowed over the past 15 or so years, which is extremely common (but not omnipresent) among clear toys from this era. On the one hand, it isn't a particularly flattering or attractive choice of plastic. On the other hand it is unusual that roller and the other accessories shown in the baggie are not discolored at all. 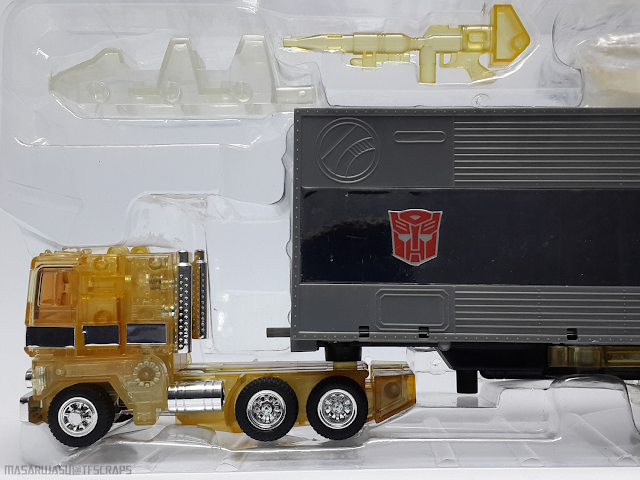 Zooming in a little, one can see the Autobot logo on the trailer has been hand-cut and placed on top of the chrome decal. Roller is a clear plastic, and the standard rifle is amber. 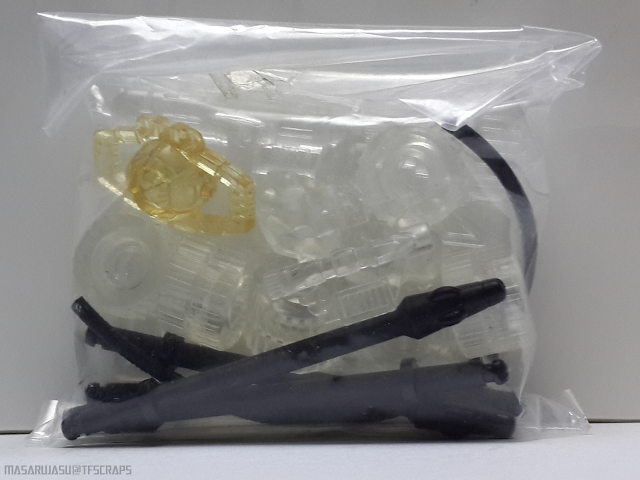 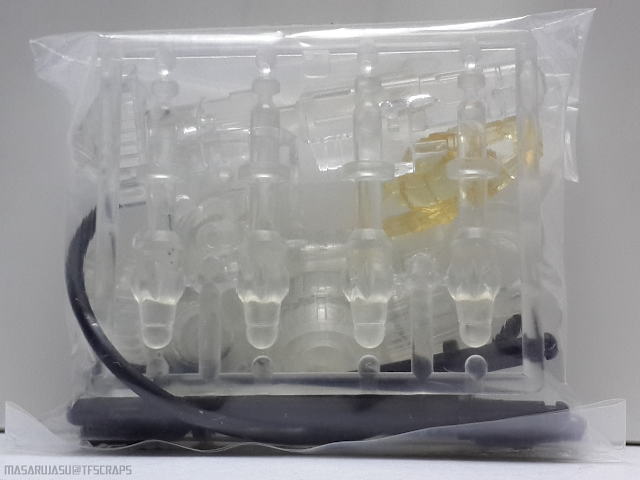 Taking a look at the baggie, we have clear plastic wheels for Roller, clear missiles, gas pump and nozzle. There is also a clear bloated rifle and an amber matrix, which were included with the Japanese release 2002 New Year Special Convoy. The hose is a regular black flexible plastic. What is interesting is that a set of 4 black 'safety' missiles are included, which are the longer version exclusive to the US release. This would allow the prototype figure to be potentially offered to different markets, but perhaps the parts considered less safe would have been removed if the figure was used as a prize in the US. Let me tell you, the trailer launcher is absolutely nerfed - there is no spring installed in the launcher at all. 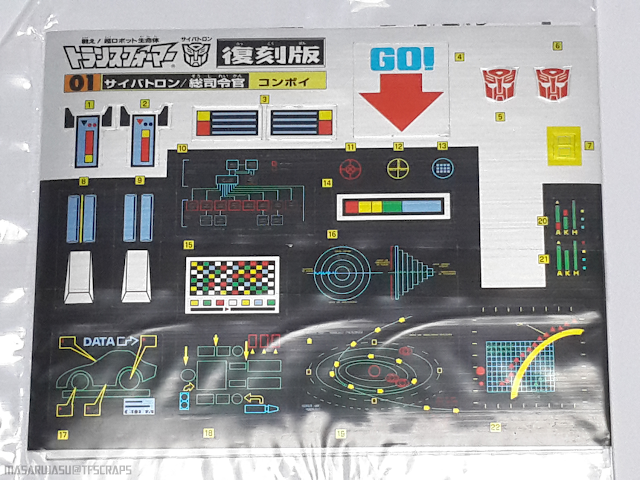 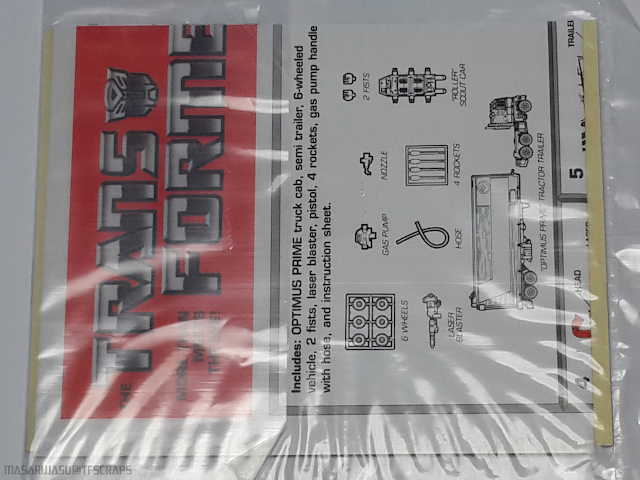 What else was included? The sticker sheet that originated with the 15th Anniversary Convoy of 2000, and a US instruction sheet. I believe this is the standard set-up for the Commemorative Reissue of 2002. I haven't actually owned one until now!
So, it turns out that a figure like this has been sighted somewhere. A photograph of the same setup (but different specimen) is on Fred's page, here. This photograph itself may have been taken as early as 2002, though unsure from where it has been sourced. Though he describes it as a clear trailer, which it isn't, you can see it has the same mirror trailer sticker. This one looks like the cab is clear. Like mine, it hasn't been belted in with wire twists. It has a color break on the flap spine facing the camera, meaning it is not a photograph of my specimen, which has never been opened on that end. Mine was tape sealed both ends and then tape-cut and opened on the far end.