Today I had the pleasure of seeing a prediction fulfilled. Thanks to a fortuitous conversation with a wonderful collector and person, a mystery has been solved regarding the iconic Shockwave toy.

To keep the background brief, basically the accepted history is that Toyco first manufactured the Astro Magnum figure in Japan in 1983. Hasbro and Tandy licensed the figure as Shockwave and Galactic Man and sold those for a couple of years, and there was a spate of bootlegs in that period coming out of Taiwan.


I've previously tried to clean up some of the history regarding Toyco, and in doing so had actually suggested the handover of the toy from Toyco of Japan to Intecs of Korea. Every piece of the puzzle was strewn across the internet, and one of my goals as the writer of this blog was to make the connections from disparate information that others had surfaced and shared, but never systemised.

Firstly, in 2010 Jim Sorenson released scans of, and auctioned Ron Friedman's briefing binder. In it there was a reference to Shockwave as 'Spark Man'. This was presumed to be a discarded moniker for the cartoon character that never made final development. Unfortunately the scans are no longer online as they were saved to Megaupload, but the tfwiki makes reference to it here.


Secondly, the G1 Shockwave toy states that it was made in Korea by Intecs, Ltd. Note that this figure features 'Toyco Trademark' and '© 1983' stamped on the inside right leg.


Third, Galactic Man is also made in Korea and has the identical stamping 'Toyco Trademark' and '© 1983' on the inside right leg.


Finally, the seminal Shockwave variant blog describes a bootleg figure called 'Spark Man'. The image was from an ebay auction, and it was presumed to be bootleg.


In my previous post, I pointed out that this was an Intecs made figure, and having made the connection to Shockwave, speculated that it contained a Toyco stamped figure.


Today, that prediction was confirmed. 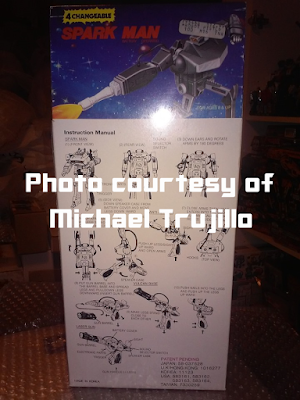 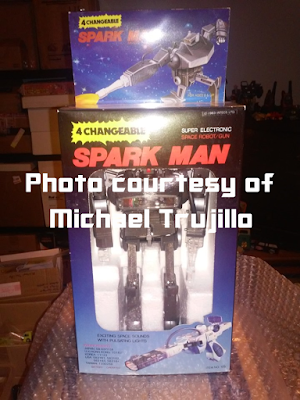 By pure chance, the actual owner of the Spark Man figure from that very auction, Michael Trujillo, shared his specimen in a Facebook discussion regarding one of the other bootleg figures*. I immediately asked if he could answer some questions, and being an equally curious variant-hunter, he agreed to inspect if from the outside, as he assumed it was tape sealed. In fact, it wasn't sealed, so upon carefully removing the foam tray from the box for the very first time, the truth was revealed... 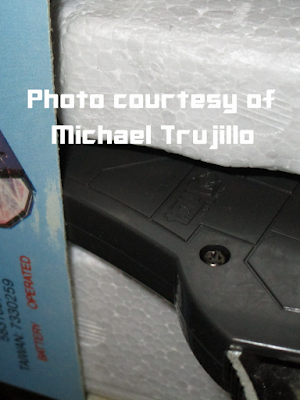 The figure was a Toyco stamped figure. As I'd predicted, but more importantly, it was an undated figure, meaning it predates both Galactic Man and Shockwave, and is second only to Astro Magnum by lineage. In fact, what this confirms, is that Intecs, Ltd. acquired the rights and the mold from Toyco, brought it over to Korea, and were already manufacturing this toy in Korea as Spark Man before Hasbro struck a deal with Intecs (not Toyco), to add the figure to the Transformers line in late 1984, and as Tandy had done for Galactic Man. Hasbro licensed Spark Man from Intecs, not Astro Magnum from Toyco! This is why Spark Man was in Ron Friedman's briefing binder instead of Astro Magnum. It is most likely that the Hasbro deal required a copyright notice to be added to the toy, (as they had done with Takara - see article for details about copyright notices).

I cannot thank Michael enough for his time and willingness to humor me and I co-credit him for this discovery. And I hope he can find a Spark Man for me!

*What was I discussing? Basically, this toy does not have a Toyco stamp (confirmed by the owner and contrary to online documentation), and is actually a KO most similar to '4 Changeable Super Gun'. 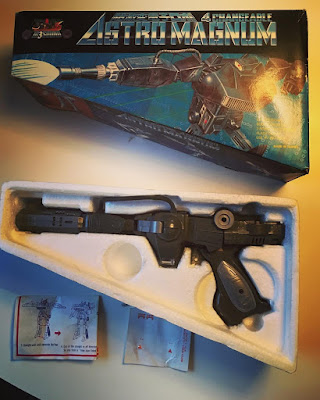