The Nissan Fairlady 280 ZX Turbo was the basis for three of the twenty-two Diaclone Car Robots. The No. 7 Fairlady Z had two versions, a blue-silver deco, and a silver-black deco. This model was the basis for Bluestreak, who oddly enough sported an entirely new all-silver deco as a Transformer. The No. 11, Fairlady Z Racing and No. 13 Police Car Fairlady Z were both almost identical to their G1 counterparts, Smokescreen and Prowl respectively. The Diaclone-only Fairlady Z decos are extremely rare, highly sought after and very expensive. The Diaclones had spring loaded launchers that fired their missiles a reasonable distance, and a small pilot for added play value.

At around the same time that Hasbro struck a deal with Takara, GiG had done the same for exclusive distribution in Italy. GiG used a nearly identical packaging format to Diaclone until 1985, when arrangements were made to use the US style Transformers packaging, trademarks, factions etc. In the Fairlady space, this was the only toy-line apart from Diaclone to feature the blue/silver pre-Blustreak. Pre-Prowl was present, as well as Smokescreen. There was no black/silver pre-Bluestreak, only the full silver version as per the US line. As with Transformers proper, there were mold/stamp progressions spanning from the pre-TF circle stamp (see below), to the the Takara copyright with dates.

Bluestreak and Prowl both made their G1 debut as series one cars in 1984. As such they can regularly be found with imprints harking back to their Diaclone days. However, even though Bluestreak's boxart suggests a blue G1 version, there was never any blue Fairlady sold in a G1 box. Both Prowl and Bluestreak were released again in 1985, alongside Smokescreen who debuted as a series two car. Smokescreen always sported a rubsign. The US versions had the springs removed from their launchers, rendering them nothing more than missile holders. As sentient robots in the Transformers mythos, the Diaclone pilots were no longer included.

Bluestreak, Prowl and Smokescreen were all available in the Japanese G1 release. These releases sported spring loaded missile launchers like their Diaclone predecessors.

In 1989 Hasbro resumed the production of many of the original Generation 1 toys in Chinese factories, to be distributed for the first time in the Chinese market. These Chinese market releases were released in packaging almost identical to their original G1 counterparts. At the same time, Europe saw re-releases of a number of G1 figures in distinctive gold boxes as the 'Classics' toyline. China received a considerably more comprehensive roster of figures than Europe, however it appears all toys from both lines originated from the same factory production. Of the Fairladies, Prowl was released in both lines, and Smokescreen solely in the Chinese line.

Timeline
The items featured on this page have been placed on the Timeline below. Treat it as relative rather than absolute.

Below are Fairlady Z Car Robots and Autobot series one Fairlady Zs that I have photographed for comparison. The exercise is to look at the progression of changes and place the variants on the Timeline.

Typically, Bluestreak had red launchers, Smokescreen white, and Prowl gray. It is logical to expect that the chrome coated missiles and weapon are molded in a plastic matching the missiles. This was true for Diaclone, but the G1 weapons often did not match in this respect, and this can be seen inside sealed paperwork/weapons baggies. It is also possible to observe that the chromed wheels have an underlying color that doesn't correspond to the launchers. For instance Prowl sometimes has red plastic wheels under the chrome.

Three Fairlady Z molds we being used in parallel.

Type 1. The original Diaclone circle stamp can be observed on the early circle stamp Prowl and Bluestreak prerubs. The mold was updated to display a Takara-only copyright stamp on the opposite foot, within a newly added sharp rectangular border, and with the circle stamp text drilled out but still visible in its original placement. The final version has been updated with the Hasbro copyright beneath the Takara copyright. The type 1 mold has 2 circles present on each piece of rear bumper. It is usually visible from below, although when it cannot be seen, it is on the top. This means that for example, two right pieces are present and one was flipped to make it a left.

Type 2. The second mold introduced has with a Takara-only stamp on the left foot, with a ridge added to increase the real estate for the stamp. In this case, the ridge is rounded on the corners. There is no imprint on the opposite foot, however the molding seems imperfect, with a slightly angled edge where bevel begins. When the Hasbro copyright is added, this time it is added to the bare foot, so that now a marking is present on each foot. Type 2 molds have '2' part numbers stamped on the following places - the fists, the neck (beneath the screw hole that joins it to the roof), and the frame on the underside of the hood that encloses the head arrangement, the shoulders, inside the leg, inside the waist cavity, under the crotch, inside each die cast leg piece near the rear side window. There are no circles on the rear bumper.

Type 3. The third mold was also with a Takara-only stamp on the left foot, with a ridge added to increase the real estate for the stamp. However, the opposite foot also features the same ridge, unlike the type 2. The Hasbro copyright was later added to the right foot. Type 3 molds have '3' part numbers stamped on the following places - the neck (beneath the screw hole that joins it to the roof), and the frame on the underside of the hood that encloses the head arrangement, the shoulders, inside the leg, inside the waist cavity, under the crotch. There is no die cast leg piece with '3', some type 3 molds use the '2' piece, and some are stamped '4'. There are no numbers stamped on the fists. There is a circle on each rear bumper, on the short edge.

Weapons are a tricky thing to validate. There's plenty of mixing going on in loose collections, meaning good samples are reduced to that which remain in sealed baggies or unseen in sealed boxes. And then there is factory mixing as well!

Launchers: There are two distinct launcher molds covering Diaclone through to series 2 Smokescreen (ignoring springs). I currently hypothesize that as there are three car molds, there are also three sets of complete weapon molds, and the launchers pictured are types 1 and 3. I have found type 1 launchers in white, red and gray. So far I have only seen type 3 launchers in gray.

Edit: After some hunting and intense comparison, I believe this is the type 2 launcher. It seems to transition features between types 1 and 3. I have only personally found type 2 launchers in red, though I have identified grey ones on ebay that I am yet to inspect in person.

Guns: There are three variants, types 1, 2, 3, based on the linear markings on the stock. Type 3 is the basis of the reissue gun as well. Type 2 and 3 feature an improved longer handle. 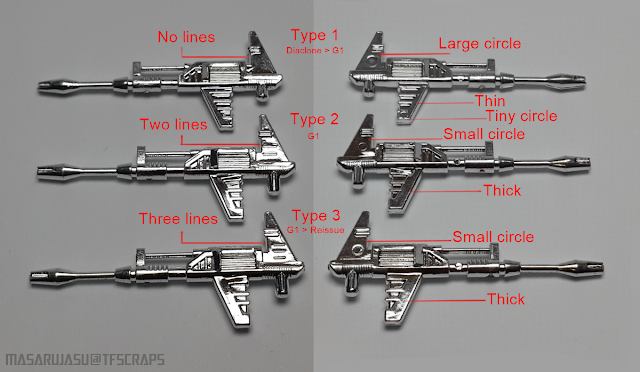 Missiles: A missile variant appears to have an extra ridge. Have seen this in sealed baggies, where the missile is type 3 - see below. Seen also in the Takara 'Book' Collection reissue, as this appears to use the type 3 mold for missiles, launchers, weapons and figure - however the reissue missiles are enclosed in a 4 sided tree for presentation. The third ridge is always accompanied by a circle mark on the shaft (but not vice versa), I have noted the extra ridge on the standard right angle tree missile (type 3), and also on a mysterious end to end tree missile similar to type 1, but with circle mark. I have not seen this type of missile attached to its tree yet, so this is something to stay tuned for more info.

There are three variants of missile tree.

Type 1. Straight - as seen on Diaclones and early G1s, even up to a transitional rubsign Bluestreak, this is a 3 sided tree with sprues connecting each missile tip to end only. This is the most common type as it was used before type 2 and 3 were created, and continued to be used in parallel. Has two ridges. No circle on the shaft.

Type 2. Right angled A - a 3 sided tree with sprues connecting straight to the end, and at right angles to the tip, but with the vestigial stub from the type 1, that no longer connects to the tip. Has two ridges. Has a circle on the shaft.

Type 3. Right angled B - a 3 sided tree with sprues connecting straight to the end, and at right angles to the tip. Has three ridges. Has a circle on the shaft.

It is not so simple that the weapon mold types matched perfectly with their figure mold types. See the following sealed baggies:

Early type Fairladies would always be matched with type 1 accessories, as this was the sole mold in use. Weapons could have been a mix of gray or red plastic under the chrome. However, as the type 2 and type 3 molds came into use, weapons began to be mixed, both in terms of the figure type they were matched with, as well as the weapon types within a baggie. In the last quarter of 1984, when Smokescreen was undergoing production, white plastic parts were also reintroduced. It is a hypothesis that chromed weapons from all three molds may have been combined and then redistributed from the central source for baggie packing on the factory line. 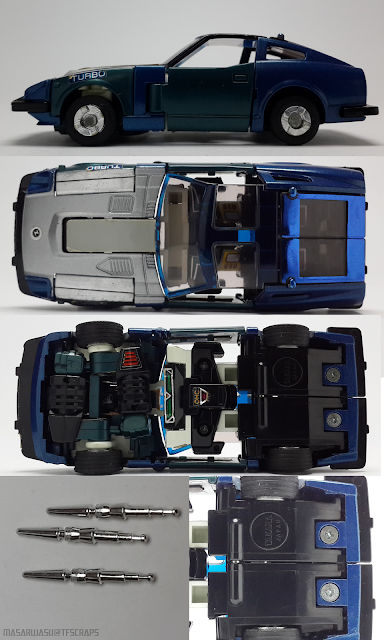 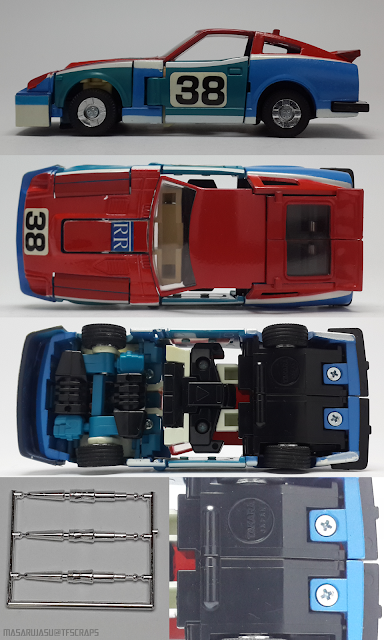 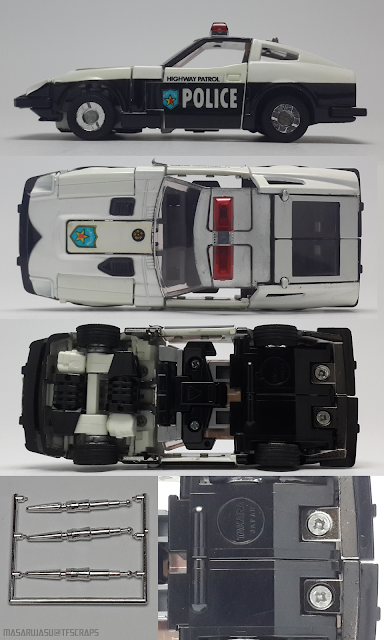 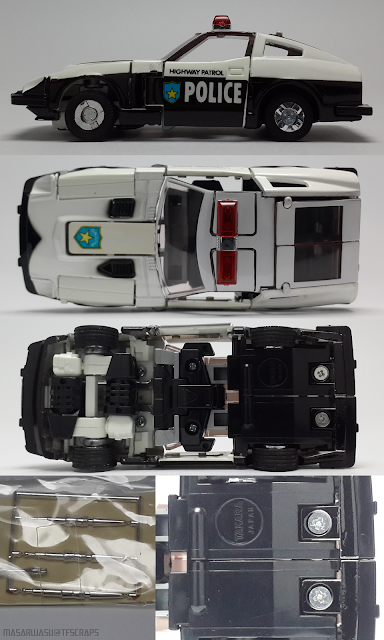 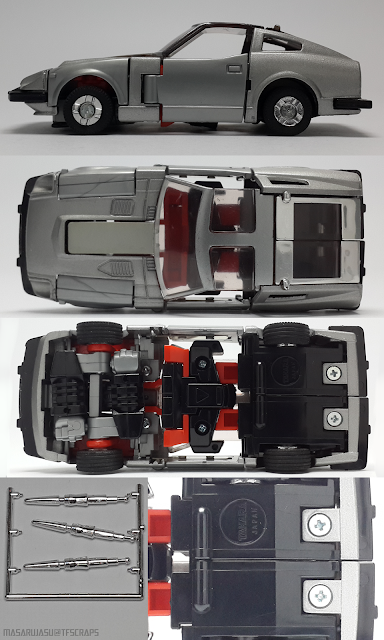 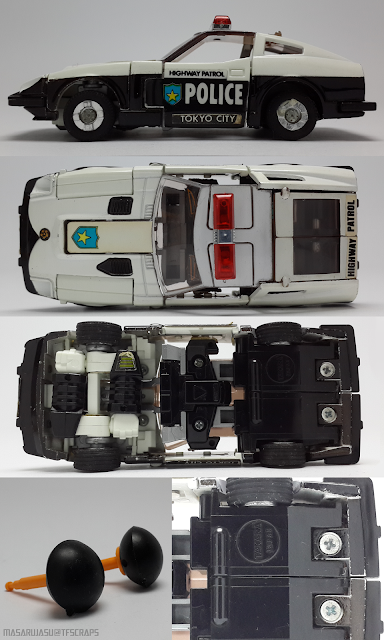 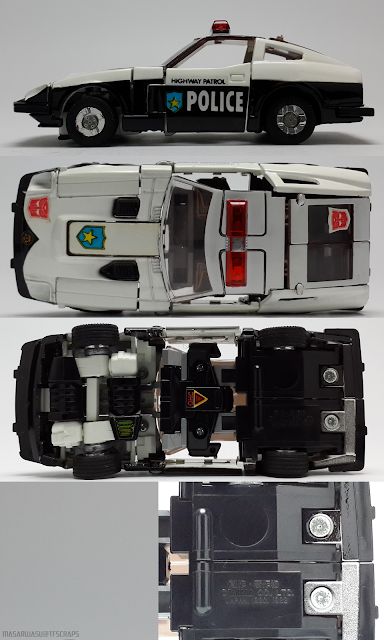 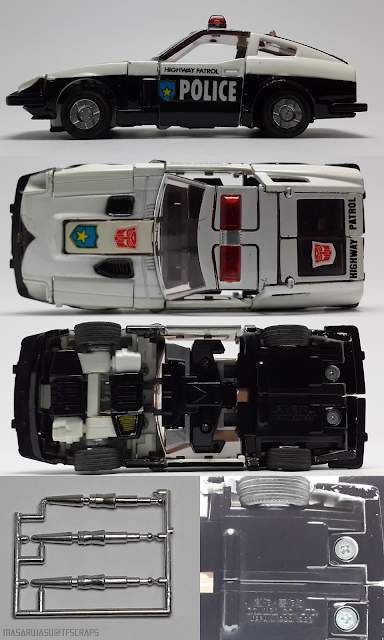 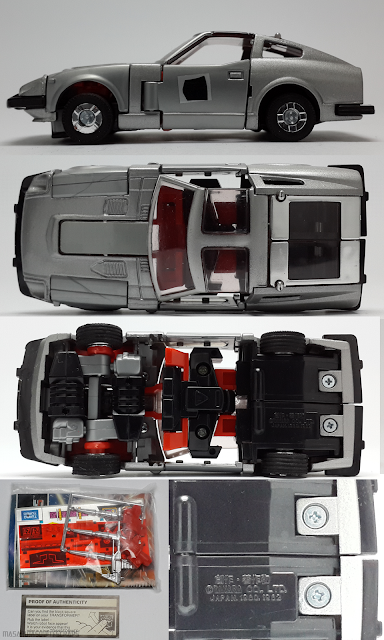 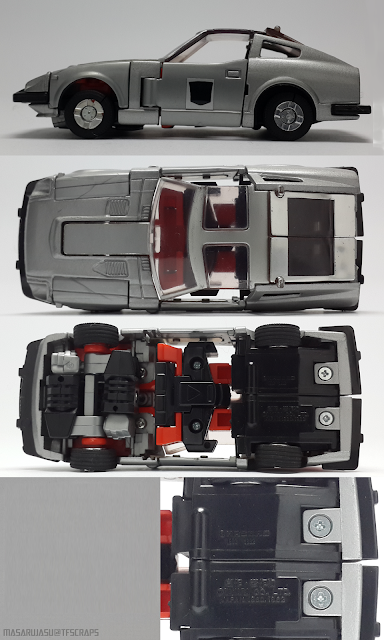 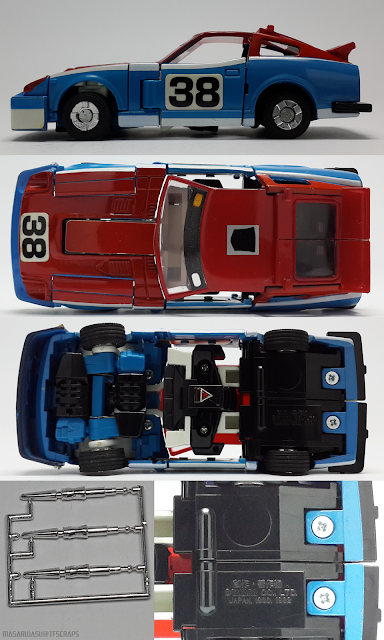 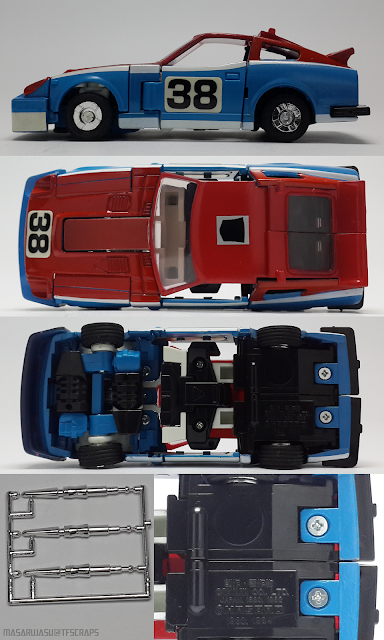 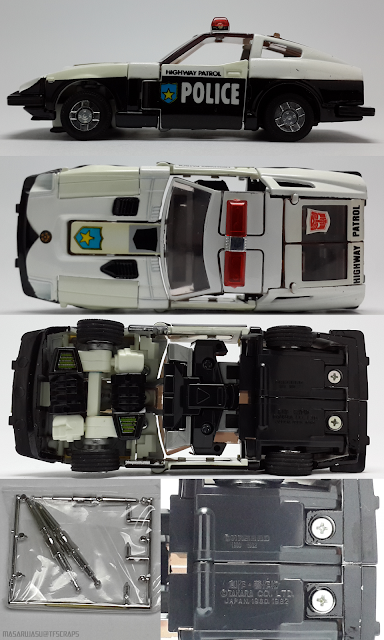 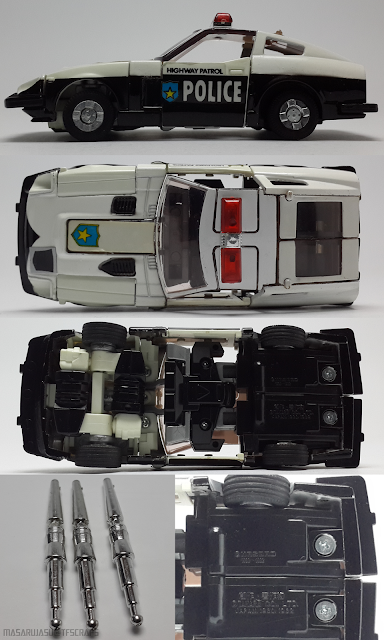 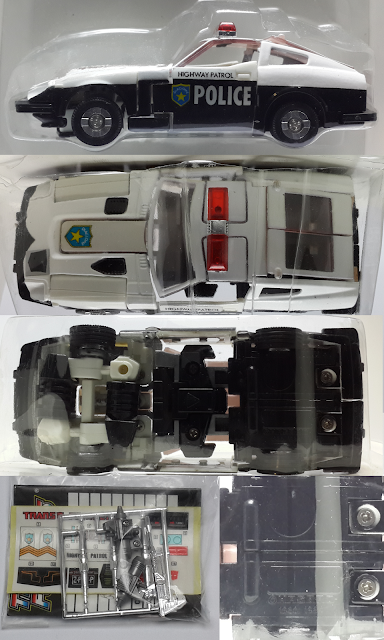 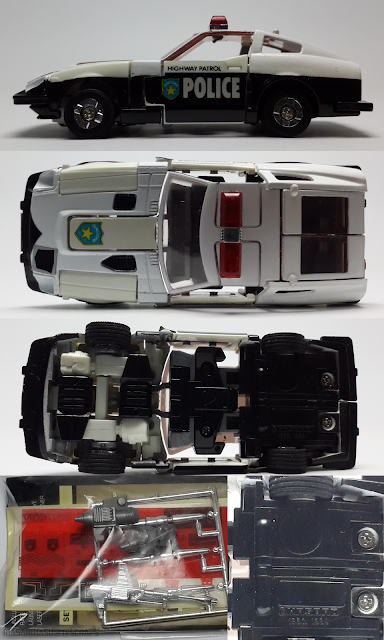 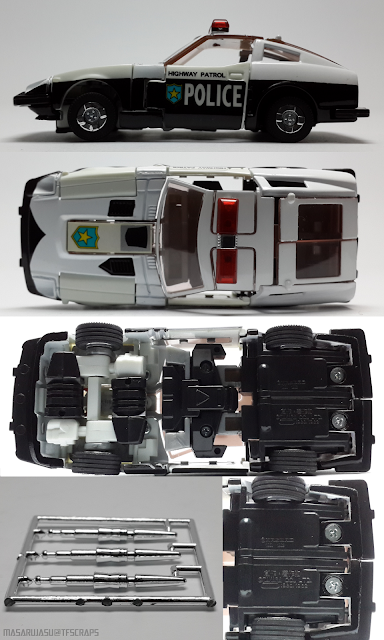 The US/UK reissues are easily identifiable by the black gun/missiles and launchers that do not have springs or a launch button.

I've concluded that all three reissues have different copyright stamps. I don't have any opened crappy reissues to confirm, but it makes linear sense by following the way the dates were blocked out, reinstated, and the addition of a fourth line on the UK version.

The reissue launchers (always type 3) are easiest to distinguish when side by side with a G1 launcher. It's essentially a matter of plastic quality. Of course the western releases have no spring and no launch button. Here I've compared against a fully launching vintage Japanese release launcher, which is really the only one it threatens to confuse. The spring is there, it's just very dark. 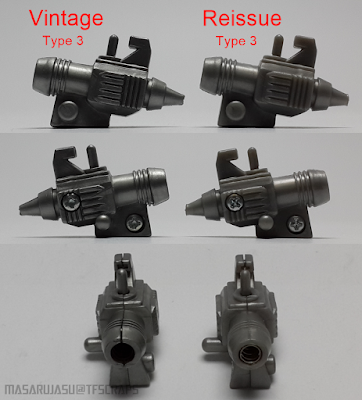 These reissue missiles feature a type 3 frame, but are (potentially) a new mold, as they have 4 ridge missiles. 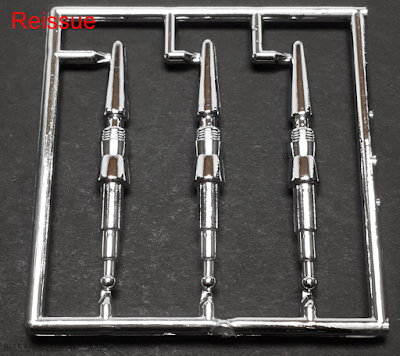 Help!
Posted by masarujasu at 1:24 AM